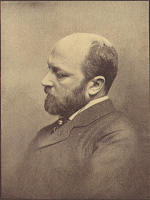 
William James, brother to the novelist Henry James, was a vastly popular, Harvard professor and author. James actually started out teaching in the area of Physiology, but found he was much more fascinated by  the newly emerging science of psychology. He made his fame by authoring the first college textbooks (a two-volume set) on the newly emerging science, The Principles of Psychology published in 1890. The textbooks which had taken James a decade to write, won him international acclaim and redefined the newly emerging field of psychology. James’ theories in Psychology are relevant to this day, and included the idea of conscious thought as a continuous river of thought, better known as the stream of consciousness. He is also credited with founding the first, U.S. psychological demonstration laboratory, although he quickly abandoned the laboratory setting as being too narrow, returning to, "the broader realms of free observation, reflection, and speculation which philosophy allowed (PBS.org)."
Later in his career James changed directions again. Following a mental and physical breakdown in 1899, he spent a year recovering, and when he returned to the lecture circuit he returned with a fresh view to the psychology of religion. He published, in 1902, the book The Varieties of Religious Experience, which centered on the similarities of individual, human, spiritual experiences across religions and centuries.

(Picture: William James attending a seance) James brought the Society of Psychical Research to the United States, helping establish the American branch in 1885. He and wife Alice became more avid in their pursuit of the spiritual and supernatural, however, after the loss of their six-month-old son. James' main concern became proving or disproving the existence of life after death. In this capacity James attended seances with the talented Leonora Piper, a strong medium the society concluded was authentic and every bit as salient as claimed. James, looking for evidence of an after life, was never completely satisfied with the results of these sittings. While Piper’s conjured spirits were uncanny in ferreting information from the sitters, often the spirits lacked knowledge of their own lives. James felt he could not conclude satisfactorily that spirits existed, but could be comfortable claiming the existence of extrasensory perception. James became president of the Society for Psychical Research from 1842-1910.
References


Wolf, A., Census in the Family: Cameo Biography William James www.pbs.org/wgbh/masterpiece/americancollection/american/genius/william_bio.html retrieved August 11,2010.
Posted by Robin M. Strom-Mackey at 9:11 AM