The Spiritualist Movement and the Establishment of the Society for Psychical Research
by Robin M. Strom-Mackey

On the topic of the scientific method: [The] "Danger only arises when the scheme becomes a system of dogma which is master instead of slave." Nora Balfour Sidgwick

During the Spiritualist Movement which began at the end of the 1800’s a society was formed by some of the greatest minds of its generation. The Society for Psychical Research (SPR) attracted the attention of scientists, politicians, writers, authors and the clergy. Among its esteemed members were the father of Psychology, William James, author of Huckleberry Finn, Mark Twain, future prime minister of England, Arthur Balfour, and naturalist and co-author of the Theory of Natural Selection, Alfred Russell Wallace; to name a few. In this short series we'll chronicle the work of these great men and women and briefly explain how they contributed to the field of paranormal research, then and for future generations, and how they o 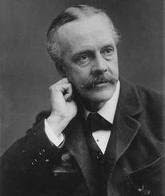 ften did this at the risk of their own reputations.

Arthur Balfour a wealthy English aristocrat would eventually become Prime Minister of England in 1902, replacing his Uncle. At his Carleton Gardens house Balfour dedicated a small room to his ongoing investigations with mediums. In this room he kept a spirit cabinet; a cabinet where mediums might sit as they conjured their evidence, behind a fabric drape. Several of the members of the Society for Psychical Research studied the supposed conjuring of mediums whom Balfour invited to the sittings. Balfour would become a member of the Society for Psychical Research, and eventually it's president (from 1892-1894) Balfour’s sister, Elanor Milfred (Nora) Balfour, married Henry Sidgwick one of the Society’s Founding members.
Nora Balfour Sidgwick is probably best known for her championing the cause for female higher education. She and her husband, Henry Sidgwick, helped to institute local examinations for women and eventually lectures at Cambridge. With the help of Anne Clough, Henry Sidgwick opened, a residential hall for female residents, which later developed into Newnham College, Cambridge. Clough became Newnham College's first principal, and Nora Sidgwick took the position of vice-principal. After Clough's death in 1892, Nora Balfour Sidgwick became the principal of the college, she and her husband residing there until Henry's death in 1900. Nora Sidgwick was one of the first three women to serve on the Bryce Commission on Secondary Education and the Royal Commission.


Nora Sidgwick possessed an incredible mind, especially as a scientific statistician. As a young woman she had worked with the English physicist Lord William Rayleigh, on mathematical computations to "imrove the accuracy of experimental meausurement of electrical resistance (Anonymous article, 2010)." Rayleigh would be awarded the Nobel Peace Prize in 1904, for discovering the element argon.
It was a boon for the SPR, therefore, to have her intellect attuned to psychical research. Indeed in her work with the SPR, she was involved in several of its more noteworthy studies, continuing her work even after the death of her husband. While she understood the incredible strides being made in science, she did feel the derision of the scientific community toward the work of the SPR, which she staunchly defended. The scientific method, she conceded was an excellent framework, but not even all things scientific could be replicated upon command. She wrote, "'Danger only arises when the scheme becomes a system of dogma which is master instead of slave (Blum, 2006).'" She pointed out shooting stars, for example, could no be replicated, yet no one doubted their existance. The SPR's work in telepathy strongly suggested that telepathy was as real, and often as unreliable to recreate, as a shooting star. For her dedication to the Society she became President of the SPR in 1908, and was named President of Honour in 1932.

Henry Sidgwick was a Professor of the Classics at Trinity College Cambridge for 10 years, before switching to moral philosophy. He eventually achieved the Knightbridge Professorship of Philosophy, which is the position of senior most philosophy proffessor at the University (a position established in 1683) His most famous work was the Methods of Ethics which was hailed as a major work in the field of moral philosophy.


In 1882 Sidgwick along with his friends Frederic Myers and Edmund Gurney would found the British Society for Psychical Research. Interestingly, Sidgwick was first compelled to study the supernatural by his cousin and later brother-in-law, Edward White Benson. (Benson would go on to become the Archbishop of Canterbury. )
Benson had helped found a Ghost Society at Cambridge, and asked Sidgwick to visit some mediums in his area and report to him. Early on Sidgwick showed a good ability to detect mechanical devices and other machinations with which fraudulent mediums tended their trades. Still, he admitted, that he was intrigued by the possibility of something beyond fraud, and that very occasionally he saw a glimmer of something real and yet unexplainable. Sidgwick became the SPR's first president.
Resources
Blum, D. (2006) Ghost Hunters: William James and the Search for Scientific Proof of Life After Death. Penguin Books; New York, NY.
Anonymous. (2010) Arthur Balfour
www.wikipedia.org/wiki/arthur_balfour Retrieved August 6, 2010.