Where are you here for – here on Earth, I mean? Well, there you are. We do not understand. We cannot understand. We are too finite to understand. The really big things we cannot grasp as yet.” Thomas Edison
Standing up in front of a psychology class recently, the instructor asked me to tell everyone a little bit about myself. These situations can often be sticky. Do you reveal that you an odd but avid interest in paranormal research, or keep that part of your life hidden like a bad secret? I decided that day I would be bold and reveal those interests that make up such a large part of my life. Predictably, my admission was met with open stares and a few poorly concealed snorts of derision. To many, an interest in the paranormal is akin to admitting you’re a voodoo practitioner. We live in a scientific world, so the skeptics say, and there’s no place in the world for superstition and the occult.
Few people seem to understand that many of the world’s foremost intellectuals (yes, many of whom were scientists) have shared this interest and devoted their time, attention, and often valuable resources to the pursuit of paranormal research. Why? Because these questions are fundamental to human existence, to all human existence. Are we alone in the universe? Do we live on after death? Are certain gifted people capable of reading thoughts and emotions of others, predicting future events with accuracy and possibly speaking with the other side? In this series you’ll find the names and contributions of several famous people who expressed just such interests, many of whom sadly suffered for their interests far worse than a snort or two of derision. 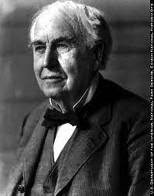 The famous American inventor, Thomas Edison, undoubtedly needs no introduction. The inventor who gave us the light bulb and the phonograph, was the holder of over 1000 patents in America and 1200 or so patents in Europe. At one point during his working career it is said he received a new patent every two weeks. A professed agnostic, Edison was only ever asked to express his thoughts on the after-life once. He is quoted in a newspaper article as saying, “Human Beings [are] only an aggregate of cells and the brain only a wonderful machine.” This damning pronouncement was followed later in the same interview with seeming self-doubt about his earlier statements. At one point he asked the reporter, “Now I am going to ask you a question. Where are you here for – here on Earth, I mean?” When the reporter responded he had no good answer to the question, Edison replied, “Well, there you are. We do not understand. We cannot understand. We are too finite to understand. The really big things we cannot grasp as yet (Blum, 2006).” It seems that his first assertion was protective in nature. The scientific revolution was a bipolar period in history; the masses had religion, the scientific community the religion of science. For a professional in the scientific community he would have been expected to be agnostic if not atheist. The second statement reveals a man struggling with the selfsame questions of humanity, and was probably closer to how he was actually thinking at the time.

Near the end of his life the inventor announced in several magazine articles and one notable article that appeared in the New York Times, that he was working on an invention called the Spirit Phone. It was directly after World War I and interest in spiritualism was, not surprisingly, markedly increasing. Edison reported that the Spirit Phone would, “measure what he described as the life units that scatter through the universe after death (Barksdale).” Unfortunately Edison passed away in 1931, before unveiling the Spirit Phone. And in his workshop the invention was not found.
In a true ironic twist of fate, Edison was reported to make appearances at seances, after his death! At a séance in 1941 he reportedly explained that three of his former assistants held the plans for the Spirit Phone in their possession. Supposedly the plans were found, and a machine built that didn’t work. Edison then reportedly made a second séance appearance, during which he suggested some changes to the machine. The inventor Gilbert J. Wright was present at the séance. Wright reportedly took on the project himself, working unsuccessfully on the invention until his own death in 1959. As far as we know, a working Spirit Phone remained simply a dream of the two inventors. 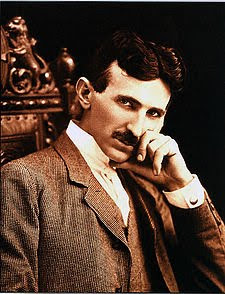 Nikola Tesla was the Serbian born, American emigrant who became perhaps the most famous electrical and mechanical engineer of all times. After graduating from the University of Prague, he worked for the Yugoslavian government for a year setting up the country’s first telephone system. In 1883, Tesla moved to Paris where he worked for Thomas Edison’s subsidiary, after which he moved to New York where he could work directly with Edison. Tesla worked for Edison only a short time before but the two men came to realize their approaches were quite different, and went their separate ways. Tesla’s contributions to the area of electrical power utilization cannot be understated.
Tesla was a multi-faceted genius who is primarily remembered for his work in electricity. Tesla realized that Alternating Current (AC) power held the key to cheap, efficient electrical power for the masses. Unlike Direct Current (DC) power, which lost too much strength over distance, AC power was sustainable. However, to make the distribution of AC power possible a machine was needed that could effectively manufacture the current. In 1888 he revealed just such a machine, the 1/5 horsepower two-phase motor which effectively generated electromagnetic energy, ushering in a new era of easily accessible and affordable electrical energy. As one author suggests, Tesla, “literally made possible the tremendous productivity of American industry in the twentieth century (Peterson, 2005).”
Tesla is also known for his work in the areas of radio and television waves, designing a wireless communications system. In 1899, two years before Marconi, Tesla demonstrated successful radio transmission and reception. And he also,”built all of the basic circuits required for the transmission and reception of wireless communications—what we now call radio and broadcast television,” knowing that someday sounds and visible images would be transmittable as well (Peterson, 2005).
What isn’t widely known is that Tesla dedicated a large part of his life to communicating with the universe. Experimenting with Extremely Low Frequency waves at his Colorado Springs laboratory while studying high-voltage radio transmissions he began to receive what he believed were messages from outer space. In an article entitled Talking with the Planets which appeared in Collier’s Weekly (March 1901) Tesla elaborated on his findings:
"I can never forget the first sensations I experienced when it dawned upon me that I had observed something possibly of incalculable consequences to mankind. I felt as though I were present at the birth of a new knowledge or the revelation of a great truth. My first observations positively terrified me as there was present in them something mysterious, not to say supernatural…but at that time the idea of these disturbances being intelligently controlled signals did not yet present itself to me.“

"The changes I noted were taking place periodically and with such a clear suggestion of number and order that they were not traceable to any cause known to me. I was familiar, of course, with such electrical disturbances as are produced by the sun, Aurora Borealis, and earth currents, and I was as sure as I could be of any fact that these variations were due to none of these causes.“

"The nature of my experiments precluded the possibility of the changes being produced by atmospheric disturbances, as has been rashly asserted by some. It was sometime afterward when the thought flashed upon my mind that the disturbances I had observed might be due to an intelligent control.

"Although I could not at the time decipher their meaning, it was impossible for me to think of them as having been entirely accidental. The feeling is constantly growing on me that I had been the first to hear the greeting of one planet to another. A purpose was behind these electrical signals (Swartz, 2001).”

According to the article, The Lost Journals of Nikola Tesla, by Tim Swartz, Tesla would devote the next 40 years of his life to perfecting a device that he believed could receive these intelligent transmissions from outer space. For his work Tesla became ostracized by the scientific community. Tesla became, “the epitome of a mad scientist (Swartz, 2001)."
Resources