Mystical America; Spirituality and Belief in the Paranormal 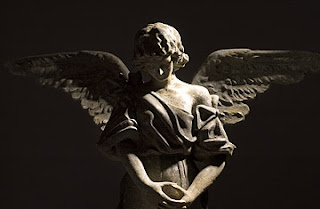 An amazing 55% of Americans believe not only in angels, but that they have been protected personally by angels sometime in their lives.
By Robin M. Strom-Mackey


Being a researcher of the paranormal has often caused me to wonder about the belief systems of other Americans. We are ego-centric beings by nature, and usually assume that everyone else thinks as we do. But attempting research recently on the existence of angels was both exasperating and eye-opening.  I found no critical information or research into the existence of celestial beings.  I did, however, find numerous sites discussing how to call a personal angel to your aid. It seemed that we as a people had skipped right over the debate of, “do they exist?’ and leaped to, “how does one ask an angel to dinner?” Was the American populace really that faithfully mystical that believing in angels was simply assumed?
Believers in God


Apparently the simple answer is yes. Over the course of the last decade the Baylor Institute for Studies of Religion has conducted two landmark studies (2005, 2008) which indicate that Americans are, as a whole, a very diversely spiritual nation; a people described as casually mystical in our beliefs. Even now in our current, boldly secular era, with atheists demanding a separation of everything secular from anything even remotely religious, and with Christianity out of “fashion,” in the media, we as a people are still firm believers in the spiritual. An overwhelming 85-90% of the population routinely reports believing in a God, and eighty-two percent of the population regards themselves as Christians.  In other words, the vast majority of the population in the United States remains Christian, and perhaps even staunchly Christian, considering that nearly seventy-two percent of the population report that they pray once a week or more, and nearly half of the population (49.2%) attend church at least once a month (2).
Of the Christian denominations the evangelical Protestants and the African American Protestants appear the most devoted believers. When asked whether one had any doubts about the existence of God, an unbelievable 100% of Black protestant responders reported no doubts. Eighty-six percent of evangelical Protestants also reported no doubts in the existence of a God.  Compare these two groups with the Jewish respondents, of which only forty-two percent (Jewish responders) said they believed in God without doubts (2).


Only ten percent (10.8%) of the U.S. population listed as being unaffiliated with any organized religion. Even among the irreligious, sixty-two percent responded that they believed in a God (62.9%), and nearly a third (31.6%) admitted that they prayed at least occasionally.  And despite increased attention, Atheism is not on the rise. According to the Baylor Institute, only four percent of the population claims to be atheist, a statistic that has remained static since 1944 (3). Compare this to France, for example the country with the highest percentage of atheists at fourteen percent.


The 2006 survey broke down paranormal belief into a number of categories and had respondents rate their beliefs and report their experiences on different topics.  The categories included: belief in Atlantis and the existence of other advanced civilizations, alternative medicine, telekinesis, psychics, astrology, ability to speak with the dead, the existence of haunted houses, prophetic dreams, UFO’s, and Monsters such as Bigfoot or the Loch Ness monster.  The Paranormal Belief Scale was a final compilation of all the aforementioned categories (2).
Paranormal Beliefs in the U.S.


Geography and the Paranormal


It appears that Easterners are the most prolific believers in the paranormal, with the highest percentages of agreement on 8 of the 10 questions. Southerners on the other hand appear to be the biggest skeptics. Southerners were 10 percentage points under the national average on the question of alternative medicines, and had the least positive responses on seven of the ten questions overall.
Gender


Gender, is the great demographic divide, with women being more likely to believe or report having experienced anything paranormal than men. Women are twice as likely to consult a horoscope, or seek a psychic to foretell their future.  Nearly half of the female population believes in haunted houses versus a third of men, and nearly sixty percent of women believe in prophetic dreams versus fifty percent of men.  The genders are equal when it comes to questions about the authenticity of alternative medicine. Nearly 80% of the population responded in the affirmative to the advocacy of alternative treatments.  The only topic on the paranormal scale in which the men outnumbered the women is belief was UFO’s. Nearly 30% of the male population believes in the possibility of the tiny green guys from Mars.


The level of respondent education had very little to do with the number of reported paranormal experiences, except, for UFO sightings. Respondents with a high school degree or less were less likely to report a UFO sighting than those listing with at least some college. Those with more education were also more likely to seek out alternative medical treatments. No other topics were significantly different (2)..
Income


Income levels did appear to have a factor among those reporting paranormal experiences.  Those living in households making >$100,000 were more likely to have tried alternative treatments or medicine than those living in households making <$35,000.  This is likely attributable to monetary advantages.  Those in the >$100,000 category were less likely to report paranormal experiences in all other categories.  Only fifteen percent reported having experienced a haunted location versus the nearly thirty percent in <$35,000 households, and only 41.3% reported having a prophetic dream versus 52.7% of poorer households (2)..
Age


It appears that both belief in the paranormal and the reporting of paranormal experiences declines radically with the aging population. Younger adults are startlingly more likely to report paranormal experiences, with fifty percent of 18-30 year-olds consulting a horoscope, slightly over fifty percent reporting a prophetic dream and forty percent having experienced a haunted house. In the 65+ age demographic only seven percent report ever visiting a psychic and only two percent report trying an Ouija board.  Only eleven-percent of older adults reported having experienced a haunted house, and ten percent reported witnessing a UFO. It is unclear whether the stark difference in paranormal belief is the result of a generational divide or if belief simply declines as one ages (2).
Percentage Reporting Paranormal Experiences in the U.S.


And back to the topic of angels, and my surprise at the unquestioned acceptance of their existence; it turns out the Baylor researchers were as astounded on the question of angels as was I. The Baylor study reports that an amazing 55% of respondents reported affirmatively to the question, “I was protected from harm by a guardian angel."
Christopher Bader, director of the Baylor survey said this was the biggest shock of the 2008 survey. "’That was something that was a complete surprise, because this is not a question of ‘do you believe in guardian angels or do you believe in angels'. This is a very specific question: Do you believe you have been protected from harm by a guardian angel? Do you believe you avoided an accident through the agency of a guardian angel? To find out that more than half of the American public believes this was shocking to me. I did not expect that (1).’" Barnard College Religion Department Chairman, Randall Balmer sums up the American population as living in an “enchanted world,” a population likely to believe in a great many things beyond established religious tenets (4).