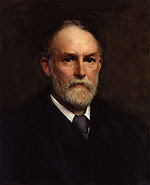 
Frederic Myers was a professor of Classics at Cambridge University in England. An essayist and poet, he is known for such works as the poem St. Paul and Essays, Classical and Modern and Science and a Future Life. Myers' true passion appears to have been in quest of the meaning of it all.
Oddly, Myers didn’t turn to the classics in philosophy or literature for his answers, nor search it out in mainstream religion. Instead he sought out answers through the meticulous examination of human paranormal experiences. As a scholar, Myers was described as a man of “enormous energy” and “great intellectual ability.”
He is probably best remembered as being the founding father of the Society of Psychical Research and for publication of his life’s search which culminated in the book, Human Personality and It’s Survival of Bodily Death which became a classic book on the subject. Pooling all of his studies into one final book of essays didn’t satisfy Myers’ quest however. After studying the paranormal for most of his adult years he was no closer to admitting his evidence complete or irrefutable.
After countless hours studying mediums and their performances he was in little doubt of the medium’s abilities but was in severe doubt of just what that ability entailed. He had attended séances that seemed to insinuate that the dead were speaking through the medium. The medium would adopt a voice that sounded like a dead person, and that voice would list an impressive array of facts about that person’s life. At times, however, he’d found that the supposed departed was very much still alive. Sometimes it seemed that the mediums were gathering their information from the minds of the people in the room. Still worse, he conducted case studies, sending in subjects who were instructed to concentrate on fictitious persons. The medium seemed to read the mind of the subject and report through the voice that false identity.
Sadly, Myers concluded that it wasn’t a simple to determine from whence the information was coming. In fact the mediums could not determine the source of information, whether from a spirit or the minds of the subjects in the room. After a lifetime's worth of study he wasn't to know the answer to his most troubling question, not at least until he passed over himself.
Resources

Currie, I., Edited by Sherpherd, P. Excerpts about the life of Frederic Myers; You Cannot Die: The incredible Findings of a Century of Research on Death
http://www.trans4mind.com/spiritual/myers1.html Retrieved August 5, 2010.