See Parts I, II and III of the Current Debate under July 2010 heading, Part IV under January 2011 heading to learn about AC vs. DC power, atoms and electrons, and a description of how electricity works in the human body.
By Robin M. Strom-Mackey"The Infrared spectrum may be important to ghost hunting because this area of the electromagnetic spectrum seems to be, according to Steiger, where the greatest number of paranormal manifestations occurs."

A Simple Explanation of Electromagnetic Energy
Electromagnetic energy is a combination of electrical impulses and magnetic force coupled together. The two forces move together in waves. The lower end of the spectrum has looser waves with the crests further apart. At the low end of the spectrum, and not shown on this graph are the Extremely Low Frequency (ELF) electro-magnetic fields of AC power, which we use to power most of our electric appliances. Above that (shown below) are the Intermediate Frequency Fields (IF) with the wave crests closer together. This is the radio wave and microwaves portions of the spectrum. The infrared spectrum is just below what is visible light to humans. Just beyond the visible light spectrum are the ultraviolet rays. Undoubtedly you’ve heard of ultraviolet rays in connection with using sunscreen on a hot day. These light rays are faster moving and thus have more energy which can be harmful to exposed flesh. 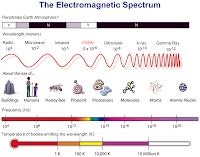 Electricity can be static. For instance, when you break the electrical circuit by turning off a light switch, the electrons that would normally be shifting down the circuit from one atom to the next stall out and merely rotate around their own nucleus. Magnetism can also be static. Consider the magnets you use to pin important pictures to the refrigerator. However, when electricity and magnetism become coupled, and when one of these forces change, it causes a change in the other force. Both begin moving together in waves -electromagnetic waves. The magnetic and electric fields of an electromagnetic wave are perpendicular to each and to the direction in which the wave is moving. Electromagnetic waves appear impervious to such concerns as gravitation or friction. Once created, an electromagnetic wave will continue moving forever unless it becomes absorbed by matter (nasa.gov).
The Infrared Spectrum and Implications for Paranormal Investigating
Infrared light has a wave range just as visible light. The wave length of the farther region of infrared (i.e. closer to microwave) are about the distance of a pin head. Nearer the visible light spectrum, infrared wavelength is about the distance of a one celled organism. The infrared light band can be divided into three regions: Near IR, Middle IR and Far IR depending on their wavelength measurements. The infrared waves in the Far IR region are thermal in nature. Hence, while we cannot see infrared waves as visible light with our eyes, we can feel it in the form of heat – or thermal radiation. The warmth released by a radiator or the heat coming off a sidewalk on a hot, summer afternoon are examples of infrared waves. Thermal IR cameras work in this region recording the thermal heat waves. The NEAR IR waves emit light waves versus heat. (Nasa.gov)


The infrared spectrum may be important to ghost hunting because this area of the electromagnetic spectrum seems to be, according to Steiger, where the greatest number of paranormal manifestations occurs. Many cameras, both video and still, come with the ability to work in near darkness using an IR setting. It should be noted that these cameras work in only the Near IR region, that region closest to the visible light spectrum that we can see with our eyes.
Many digital cameras are still sensitive to both the visible light spectrum and the Near IR region, even when not placed in a specific IR setting. This can account for photographs taken that show an anomaly not witnessed when the photograph was taken.
To determine if your camera is sensitive to Near IR light waves, Haunted Chicago suggests using a TV remote. The end used to direct the television works on the Near IR spectrum. Thus, when depressed and pointed toward a camera the light rays should be visible if the camera is sensitive to this region.
The thermal properties of energy given off by Far IR infrared waves, might also account for temperature fluctuations that are reported so often during or slightly before paranormal manifestations. Odd fluctuations in temperature are often noted during paranormal activity – in particular odd cold spots. According to Steiger these cold areas can demonstrate a measurable drop of anywhere from 10 to 40 degrees. It should be noted that during this temperature dip, temperatures don’t fall throughout the entire building, nor even the entire room, but appear to be localized to one small area. Steiger accounts for this oddity by explaining that entities are attracting to themselves the “condensation of free electrons in the environment. (Steiger, pg. XI).”
By free electrons Steiger means the naturally produced air ions. These ions are created when an atom of a natural gas loses one of its electrons, creating a positively charged molecule and a negative free floating electron. Steiger seems to suggest it is the gathering of these “free electrons” by the entity that it uses to fuel itself. Steiger contends that the movement of dispersed electrons to a specific spot would cause the momentary feeling of chill in the surrounding areas. It is also why many investigators use ion detectors during investigations.
The third similarity, Steiger contends, is found in the infrared spectrum, the area just below visible light.
Based on research and discussions it appears that entities, ghosts, spirits etc. are more sensitive to being seen in IR light than UV light. This is in line with another theory that ghosts move very quickly through our space. A high speed object would be better illuminated with a low frequency/long wave light source than a high frequency/short wave source. It is also possible that whatever the composition of ghosts is (including ectoplasm) is more sensitive to reflecting IR light.
Resources

Layton, J. How Does the Body Make Electricity - and How Does It Use It? http://health.howstuffworks.com/human-body/ Retrieved January 11, 2011.