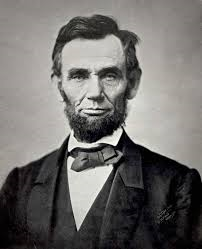 Lincoln was exhausted. Too tired to remove his clothes, he lay down on the first flat surface he could find, a small settee. Near the couch was a bureau with a mirror on top.  Lincoln was shocked at his appearance in the mirror. His face looked wan and thin and bleached of all color.  When he later recounted this to his friends they suggested he grow a beard to hide the narrowness of his countenance and to give him a more presidential image. It was then that Lincoln felt he had his first vision, what he felt later was a vision of prophetic import. He realized that when he looked in the mirror what he saw was two distinct images of himself superimposed. He could tell there were two images because they didn’t quite align with one another, and he could tell distinctly that the tip of one nose was about three inches beyond the other.  As he stared in the mirror the vision disappeared, but reappeared a few moments later more strongly outlined. Staring at the dual images he realized that one of the images was far paler than the other, as pale as the face of death. The vision disappeared again and Lincoln dismissed it to sleep deprivation and the excitement of the last few days.
He did, however, recall the visions to his wife Mary, who felt she knew the significance of the two faces.  The healthier face, Mary felt, was the face of her husband during his first term as president. The fact that the face had more color and appeared healthier she felt indicated that he would live out his first term as president.  According to legend, Mary interrupted the second paler face to indicate her husband’s second term of office. She felt he would achieve a second term, but would not live to see it through.  Over the course of the next few days, Lincoln apparently tried to recreate the vision in the mirror, which he was able to do on several occasions.
He did scoff at the notion of prophecy later to friends and colleagues saying that it must have been an anomaly in the glass or a hallucination brought on by lack of sleep.  However, this apparently was not his only prophetic moment.  Shortly before winning the election Lincoln apparently was talking to a group of friends when he said about the probability of the Civil War, “Gentlemen, you may be surprised and think it strange, but when the doctor here was describing the war, I distinctly saw myself, in second sight, bearing an important part in that strife (Taylor,  2003).”
According to union war documents, late one night during his presidency Lincoln burst into a local telegraph office demanding information.  He told the operator to immediately contact Lincoln’s union commanders as he was quite sure the Confederates were about to cross federal lines.  When the stunned operator asked the president how he had obtained such information the president blurted out, “My God, man, I saw it!”
Tragedy Befalls a President
Mary and Abe’s second son Edward had died in 1850, but it was the death of Lincoln’s third son Willie in 1862 that nearly derailed the president.  Willie was the son that most resembled his father, and therefore was his parent’s favorite. He was reportedly reading and writing proficiently by the age of eight, while his more athletic brother, Tad, did not achieve such distinction until the age of twelve. William Wallace, named for a doctor in Springfield, Illinois, had been a quiet and thoughtful child who excelled in reading and academics.  With a wonderful memory, Willie had been able to recite whole bible passages by rote, and often told his parents that he intended on becoming a minister when he grew up.
While so many Americans were losing their own sons to the war, perhaps the death of Willie was a tragedy that resonated with the populace.   Even the Confederate President, Jefferson Davis, sent condolences after the death of the boy.
The loss was exceptionally painful to the president.  Lincoln reportedly locked himself in his office for several hours after the death and would not answer the door.  The boy’s body was supposed to be sent to a grave in Springfield, Illinois. However, a family friend, William Thomas Carroll, offered a place in his family’s tomb where Willie’s body could be put temporarily while Lincoln remained in Washington, and later moved back home. Apparently Lincoln could not suffer to let the boy be too far from him. Reportedly Lincoln returned on two separate occasions demanding the casket opened.  The embalmer apparently had done a good job, and Willie looked as if merely asleep.