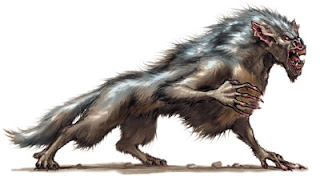 Walking along a deserted, country road at dusk, you are enjoying the quiet solitude. The stars just beginning to twinkle along the dome of the heavens; the shadows lengthen, the trees in the distance forming an indistinguishable grey wall. The hay in the field bends as one upon a gentle breeze, becoming a hazy green rolling sea. You feel an inner peace, as the moon slides lazily up the horizon.

And then you notice something. You blink once, twice. Perhaps the fading light is playing tricks on you. But you could swear that up the way a bit is a big animal standing at the side of the road. You wouldn’t be so worried but that the creature wasn’t there, and then it was. Silently it approached on padded paws. And now it stands there staring as you stare back. Is it stalking you?

It appears to have the shape of a large shaggy dog. But you realize slowly that you’ve never seen a dog so big. “Wolf,” you wonder? But there haven’t been any wolves in the area for years. Whatever it is, it’s standing there staring at you with huge, red glowing eyes. And then you sense, rather than hear, a low, visceral growl. The peace is shattered by a primal terror so deep you’ve only ever dreamt of it in nightmares. You are cold to your soul with fear, though the animal neither advances nor retreats. You rub your eyes, thinking you must be hallucinating. You look back at the spot by the side of the road, but the light is failing and where you thought you saw the animal is now black, indistinguishable gloom. 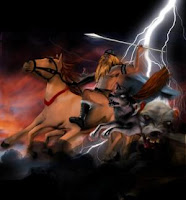 Still, you are taking no more chances. You turn and run in the opposite direction as fast as your heaving legs will carry you, afraid every second that the creature will descend on you with fangs and claws. Is that the hammering of your heart or the sound of paws following? You see it up ahead, a farm house. “Help me!” you scream as you fly up the cobbled path! Beating on the door, you scream once again, “For the love of God, Help me!”

For those who have experienced the terror of the black dog, you are not alone. Animals such as this have been witnessed and recounted for time immemorial. The myth of the Black Dog is believed to have originated with British folklore, though sightings of such creatures is not limited to the British Isles.

Where do the stories begin? It is likely that the black dog legend arrived with the Viking invaders. In the Norse religion the god Odin was said to keep a frightening hound, a beast “that came from hell (4).”
Up rose Odin, the ancient gautr,
and on Sleipnir laid the saddle.
Downward he rode to Nifhel;
he met a hound that came from Hel.

Then again in the Celtic legends, Arawn the God of the Dead kept hell hounds whose task it was to search out human souls, returning them to their master (1).

The black dogs in Britain are most often referred to as Black Shuck. The word shuck may have derived from the Anglo Saxon term scucca, which meant demon or devil. Or the word might have been an adaptation of a local term shucky which meant shaggy (1).

Different locations in the British Isles have different names for the creature. In Norfolk he is Old Shuck, while in Suffolk it's Old Shock. In Yorkshire the name is Barquest. In Ireland they refer to him as Pooka, in Lancashire Shirker or Howler. In Scotland the dog is Muckle Black Tyke, while on the Isle of Man it's known as Mauthe Doog. In Wales, Gwyllgi - or the Dog of Darkness (1, 2).

Whatever the name, the spectral beast of legend has many distinct characteristics. It is reported as being a very large animal, described in much of the literature as the size of a calf. It is often described as having abnormally large saucer-shaped red-or yellow glowing eyes. In some accounts it is reported as being headless, or having only one large Cyclops-like eye. (1) Often it is said to emit a foul sulfurous odor. It will appear to be as solid as any dog, but can disappear in front of your eyes. Or, it may disappear in an impressive explosion of red flames.

Touching the creature usually leads to death shortly afterwards. Although in many of the legends just seeing the beast means certain death in the near future; whether one has patted the pooch or not (2). Many of the stories describe the creature as wearing a collar or chain, which rattles as the creature moves. While they appear to walk on the ground they leave no footprints. And if you allow one such creature to get close to you, you may feel the uncomfortable sensation of its icy breath. On stormy nights the creature is said to howl. (1).

Like the family dog guarding its yard, the black dog appears to be territorial, guarding a specific graveyard, quiet stretch of country road or favored river bank. There will often be several sightings of similar characteristics in and around the same locale (1). Usually the locations are historical in nature, already ripe with stories of the macabre or uncanny, or associated with ancient monuments or ley lines. These places are considered by some to be areas where the wall between the worlds is thinner, perhaps explaining the need for a watchdog. One article suggested that the black dog is an archetype created by the human mind to explain a strange type of energy emitted in these areas (6).

Soul Collectors or Harbingers of Death

One author suggested that the legend of the Black Dog appears to fall into three distinct categories. They may be a harbinger of death, a hell hound or a graveyard caretaker.

1. Harbingers: As hinted before, spotting the legendary Black Dog is usually considered a sign of impending death. Or seen in a different way, the Black Dog might elect to show itself to someone to warn them of their death. In many anecdotes about the Black Dog, they appear to desire only to appear before the onlooker, not to attack them physically. Witnesses report that it is after seeing the Black Dog that something happens, either to them personally or to someone close to them (3).

However, the significance afforded to a sighting of the dog varies widely with location. In Devon, for example, it’s believed that even speaking the dog’s name brings misfortune. Suffolk residents feel the beast is harmless if left unbothered. And in Summerset resides the Gurt dog, a being so benign that it is said mothers allow their children to play on the Quantock Hills without supervision; depending on the ghostly canine’s protection (5).

2. Hell Hounds: The legend of hell hounds suggests that the mission of the ghostly beasts may be to hunt down and retrieve the souls of the dying. Should an intrepid person make a deal with the devil, they are usually given a certain amount of time in which to enjoy their wish – usually 10 years. However, when the debt comes due, the devil sends his hounds to retrieve the soul. The hounds are described as giant, fierce beasts that can outrun anything and that never miss their man (3).

3. Kirkyard Dog: Or the beasts may be a take on the Churchyard Grim. In old superstitions it was believed that the first person to be buried in a churchyard (graveyard) became the official cemetery security guard – relieved of duty on Judgment Day (hopefully with full back-pay). The thankless job of the Churchyard Grim was to protect the resting souls from the devil. If a dog was buried in the churchyard before a human, the task fell to the canine. It was also possible that a person of some importance, an auspicious birth or death, could take over the duty of watchman, teaming up with the graveyard dog, thereby forming a watchdog team o’ eternity (3).

4. Watch dogs on Duty: I would suggest a fourth category to the legends of the Black Dog; that of watch dog. Several accounts I have come across speak of haunted locations where the watch dogs never retired. If a person kept a fearsome animal while alive, it appears sometimes the animals, even in death, are still guarding their property. It may be that the animals don't know that they are departed, and thus relieved of duty. But whatever the case, these creatures remain to guard the locale, running off the unwary in sometimes brutal fashion.

The legend of the Black Dog is eons old, though the stories continue to permeate the popular culture. While the stories are legendary the sightings are not. People still report seeing these animals in the British Isles and elsewhere. Some of these creatures may be legendary. Others appear to be watch dogs that haven’t stopped guarding the family estate. If you’ve experienced a black dog sighting please email your story to biancospirito@yahoo.com. We’d love to include your story in an update.