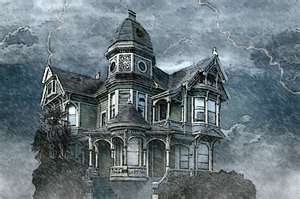 It was the first day in our new house, a hard day of hauling and carrying and cleaning. We ate late, sitting on the floor, and then we had put our young son to bed in a sleeping bag, and curled up in our own sleeping bags and fell asleep exhausted. Sometime late in the night I awoke with a start to see a young child peering at me. The child then straightened up, turned around and skipped out of the room and down the hall. I called my son’s name several times, assuming of course that it was him that was up and playing around. When he didn’t answer my calls and I failed to hear him moving in the hall I became confused. I got up and went down the hall to his room…only to find my son in his sleeping bag, sleeping soundly. Had I actually seen a ghost on the very first night in our new home!?
For years I puzzled over that experience. However, recently I came across the theory that really made me rethink the whole incident. Maurice Townsend, in an online article for the Association for the Scientific Study of Anomalous Phenomena (ASAP) calls it the ‘New House Effect.’ Basically this common sense theory suggests that in a home where you have lived awhile you become aware and thus immune to the idiosyncratic sounds and sights. For example, I know that the second and third steps in my home will squeak when stepped on, and that if the garage door is open it causes a strange suction that makes mudroom door slam shut. I know these things because I’ve lived here for several years.

But when you move into a new house or apartment these new, strange sights and sounds can cause a person to feel anxious, especially at night as the noise of the day abates and shadows descend. Think about the last time you stayed at a hotel, for example, and found yourself unable to sleep. When in a new location new sounds or sights can not only be confusing but may start to feel alarming as well. The way a door casts a shadow in a hall late at night or a pipe in the wall makes noise when it expands or contracts. Floor boards may squeak spookily even without someone walking upon them. A door may swing shut, seemingly on its own. Already feeling anxious, a person in this situation may jump to conclusions and interpret these events as being paranormal.


Still not convinced? Consider this fact; most people who report a haunting do so immediately after they move in. This occurs at locations where the previous tenant reported no activity. Why? Because the former tenants were accustomed to the location, whereas the new tenant is not.


The most often reported phenomena are strange sounds, which is not surprising.
Consider the plumbing, heating and electrical wiring that run all over a house,
hidden behind the walls. Wood floors can also makes sounds when the temperature
changes. Most of these sounds are caused by things we cannot see or thus
identify, which means they can easily be mistaken for something paranormal.


Strange Sights
Strange sights are less often reported, according to Townsend, because something that can be seen can also be investigated. Still strange shadows can appear to look like figures in the dark. Trees and vegetation can also throw shadows upon the walls, shadows that will appear to move when the tree branch shifts in a breeze. Car
lights, in particular, can play havoc with the lighting in a location as they move down the street. You may notice moving shadows, or balls of light moving on the walls. In the dead of night, at a new location, this can seem very sinister. I once investigated a locale where it was reported that strange balls of light could be seen on the security camera but could not be seen with the naked eye. Upon investigation we concluded that a car light shining up at an angle through a window hit a computer screen which created the ball of light which was obvious on the security camera but which we could not see. Conclusion? Light and shadows can behave in very strange ways but still have completely natural explanations.


Old House, New House
Often when renovations begin in a building an uptick of paranormal activity is reported. The popular theory of paranormal investigators suggests that the spirit is unhappy with the changes to their ‘home.’ But a more prosaic answer might be the ‘New House Effect.’ When one tears down walls, changes plumbing, replaces windows the old house changes. Sound will carry differently, noises never heard before may become audible, and the quality of light may change. The once familiar domain is changed. The old house has become a new house once again.
The Snowball Effect


Once a person has labeled their location as haunted they will tend to start interpreting every odd occurrence as being ‘the ghost. ‘The keys go missing blame the ghost. The light in hallway keeps burning out, it must be the ghost. Heard a strange whispering sound? It's obviously the ghost. In the same house where I had the odd experience my son’s toys would often go off by themselves. I noticed that after we moved out of the house it didn’t happen. Ghost? Probably not, though I attributed it to the ghost at the time. In retrospect, I realize that he was very young and had many cheap, noise making toys which required batteries. As he got older the noise makers got weaned out for Leggos and action figures and the noises stopped.
The New House Effect and Paranormal Investigations
The point is, as soon s a house is labeled as haunted, everything starts to be attributed to the aunting. If the residents are anxious to begin with, they may grow
increasingly frightened of their surroundings. Even those who take the haunting’ in stride may not consider more rational answers to their odd ccurrences. Just telling someone that a locale is haunted changes the way they ill iterpret anything they hear or see the human mind is extremely susceptible to suggestion. nce a locale is labeled as haunted it is very difficult to dispel the label.


Paranormal investigators should keep the ‘New House Effect’ in mind during investigations. Townsend points out that a first investigation to a locale will often turn up much more ‘evidence’ than subsequent investigations. The answer to the puzzle, again, is the ‘New House Effect.’ Investigators start an investigation in a location labeled as ‘haunted’ thus they begin with a bias. Add to that the oddities of the new locale, the strange sounds and sights…and voila, a haunted house is verified. On subsequent visits to a building, however, the investigator will experience less odd occurrences. They have grown accustomed to the location. The New House has become the Old House.